I usually do not like to sit idle. However, due to a busy schedule, I refrain from taking up any large embroidery project as that requires a lot more dedication and time.
I was going through the different designs that were available on Flipkart (online shopping site) and quickly ordered three pieces.

While I have complete the first two, the third one is under progress. 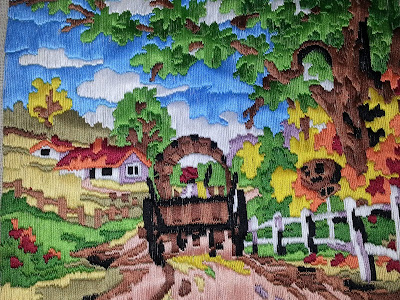 The above picture represents a village as we can see a cart moving on a muddy road. Some huts can be seen at a distance. However, what I like about this picture is the dominance of Green. Looks very refreshing yet gives feeling of the countryside. 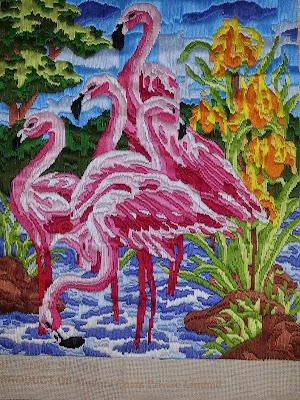 I just loved working on the above piece. As I completed each of the Flamingos, I fell in love with them. Can you see the bright hues of colour that this picture gives? I relished working on this design, and after completion all I could say was "Marvellous".

Currently I have treasured all my works in my closet. However, I would soon venture out and see if there are any takers for the same.
Posted by Unknown at 7:44 PM No comments:

Firstly, we all of you readers, a very Happy Republic Day...
Fortunately, it is the same day when I celebrate my Anniversary and today, it was my 3rd Anniversary...
Unlike previous years, we had our entire family together and that is why we decided to dine out at a place, where we would get a lovely buffet spread. After some research we zeroed in on Sigree... more because its sister concerns, Oh! Kolkata and Mainland China are our favourite joints...
So finally we were at our Destination, Sigree, The Global Grill...

To start with, we found it weird that they do take reservations beyond 1 pm and when we reached there, it was pretty crowded... may be because it was a national holiday... After waiting for 30 minutes, we finally secured a seat and then started our gastronomic journey...
STARTERS need a special mention... They started off with Ceasor Salad which was very crunchy... and then it started... one after the other... Murg Malai tikka, hariyali paneer tikka, tandoori aloo, grilled mushrooms, ajwain fish, murg peshawari and then smoked pineapples which was the show stopper...
While we were stuffing ourselves with these delicious little things, the music set the mood perfectly.

The main course was equally tempting... The salad options were not innovative...
Main course options were Methi Dum rice, Paneer zaffrani, Vegetables in Thai Red curry, Dal makhani, Herb and buttered rice, Murg Kasha, Herbed and Roasted Chicken and finally Chicken Dum Biriyani...
However, it was the herb and buttered rice, roasted chicken, chicken kasha and the pasta salad that made their way into my plate... and they tasted yum!
The dessert section was not at all unique, however, the malpua and rabri need a special mention...

The staff was helpful and polite, ambience average... Overall a complete paisa wasool experience...
Posted by Unknown at 9:27 PM No comments:


Mahabalipuram, a UNESCO World Heritage Site is located right on the Coromandel Coast next to Bay of Bengal and was a 7th century port city of the South Indian dynasty of Pallavas. Around 60 Kms south from the city of Chennai (Tamil Nadu), this is a perfect weekend getaway with a perfect blend of history, a beautiful beach and handicraft shops.

History
An 8th century Tamil text described this place “Kadal Mallai” (Sea Mountain). Another name by which Mahabalipuram has been known to Mariners is “Seven Pagodas” alluding to the seven pagodas that stood on the shore of which only the Shore Temple survives now. This city was actually the 2nd capital of the Pallavas and was named after the cruel and arrogant king Mahabali. 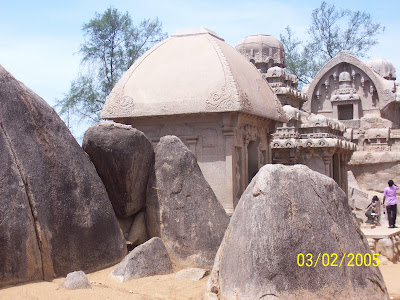 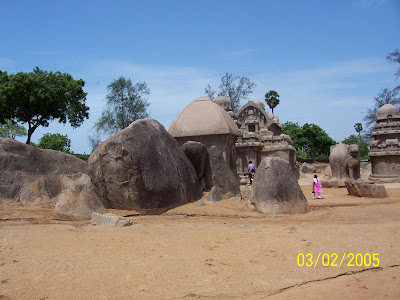 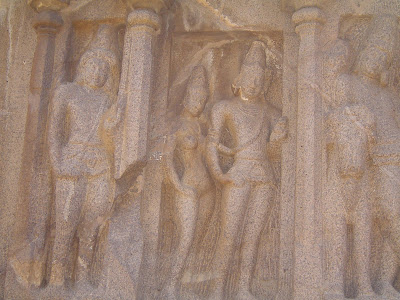 During the rule of Pallavas new styles of art and architecture were pioneered, and it is believed that some areas served as the school for young sculptors. Hence one can find various artistic and architectural creations at this site.

Some Interesting Facts
Just before the 2004 Tsunami struck the Indian Ocean, including Bay of Bengal, the water at Mahabalipuram pulled back exposing a straight row of large rocks. Soon after the Tsunami and large stone lion emerged that was dated to 7th century.

Several search operations conducted by the ASI (Archaeological Survey of India) and Indian Navy indicated that a large complex of temples were in Mahabalipuram most of which got submerged in the water due to a Tsunami during the 13th Century.

How to Reach
Mahabalipuram is very close to Chennai, approx 55 Kms away from the city and is well connected by road from Chennai. You can also take a train to Chengalpattu (the nearest railway station) and then take taxis from there.
We were a group of 4 people and so hired a cab from Chennai that charged us Rs 2500 for the entire trip.

What to See
After driving for almost 1.5 hrs we finally reached the site. Surrounded by a beautiful beach, Mahabalipuram is worth seeing. You would me amazed at the marvel of the sculptors who made this beautiful temple complex in the absence of many modern tools and techniques.

The doors of this temple are locked and one can only peep inside it. The temple is mainly dedicated to Lord Shiva however; there are some statues of Lord Vishnu as well.

The Shore Temple is best viewed from the shores of Mahabalipuram beach. As mentioned earlier, it is the sole surviving part of the 7 temples famously known as the “Seven Pagodas”, of which 6 have already been engulfed by Tsunamis in past. As we stood at the site and looked around we realized how lucky we were to witness this marvelous structure before the Bay of Bengal swallows this as well.
At the temple complex there were multiple statues of Bulls, some complete and few incomplete.

The monuments at the site are mostly monolithic rock-cuts. 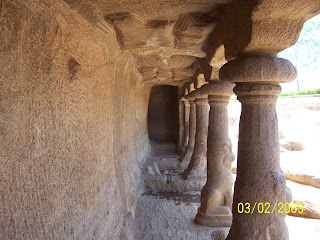 You can find several styles of architecture as some monuments are modeled on Buddhist Viharas while some resemble Dravidian architecture.

Mahishasurmardhini Cave Temple: We climbed on top of a small hillock to reach this site.

You would be tempted to click photos here as one can get a beautiful overview of the entire Mahabalipuram site surrounded by the sea from this hillock. This temple is dedicated to Goddess Durga and has scenes from Vedic Puranas depicted on its mandapam. 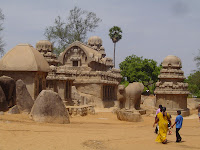 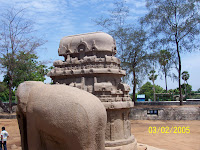 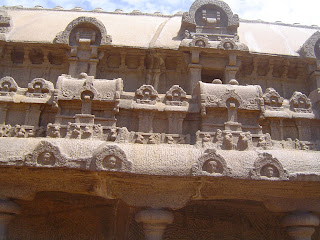 These have been carved from single piece of rocks and have been named on each of the Five Pandavas (Mahabharata).

Arjuna’s Penance: It is World’s largest Bas-relief and depicts various deities, animals as well as stories from Panchatantra.

After visiting all the monuments at Mahabalipuram, we went to a nearby cafe and had some refreshments before we could leave. While moving around in the area, you can also find plenty of Sculpture shops displaying beautiful carvings out of granite stones. 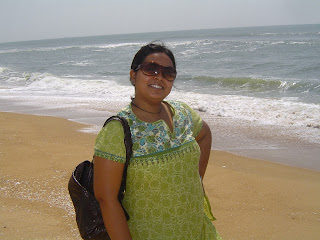 While our way back home, I was constantly imagining how the life would have been when this temple complex was alive. The beautiful carvings, organization of the monuments, the roaring sea behind… I just loved my rendezvous with History.

An empty mind is Crafter's workshop

I have always been fond of crafts and other arty stuff. Unfortunately due to other priorities in life never got much time to explore that horizon.
Currently, I am free and do not have much to do at work. So what do I do for all the 9 hours in office...? I have started searching for various craft ideas. Each day I look for something new and just keep on searching on the net. I guess even one day google will come up saying Stop Searching my dear and do something yourself... ha ha ha
Posted by Unknown at 8:14 PM 3 comments:

Yet Another Glass Painting.... this time I chose to paint an arbitrary face... 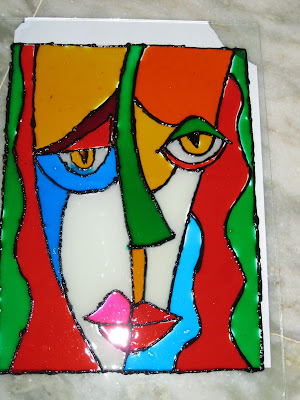 I was very excited while making this, but unfortunately some air bubbles formed while I was applying colours and I could not remove them. A little bit of blue also got smudged with white... I am planning to keep a crushed aluminum foil behind it while framing so that these flaws do not show up... Do you like it...?